It was Ashley who first wrote to me about a safari for her family.  I assumed she was the mother of this Irish family of six, but it turned out she was the 20-year-old daughter, older sister to her three brothers, and super-organised in getting the family’s Christmas plans into shape.  She was clear on time frame, travel goals and budget (most importantly) and with that information we were able to put together a holiday that fit their needs.

It seemed to be going so well in the lead up and we were very excited to be spending Christmas with a big family ourselves, albeit cooking the dinner while they were off enjoying themselves.  But that’s our job and we love it!  So it was a bit of a surprise to meet only four rather than six people at the airport on Christmas Eve.  The youngest, Ryan, had a passport that was to expire in five months rather than the recommended six.  Although Ryan was only nine years old, the check-in agents in Ireland had suggested that it would be better he go and find another passport because the Kenyan authorities would not have many qualms in detaining a child (I still don’t really want to believe it to be true, but better not to test the theory).  So Ryan and his father set off to the passport office to try and get a new passport (on Christmas Eve!) and be on the flight the next day, Christmas. 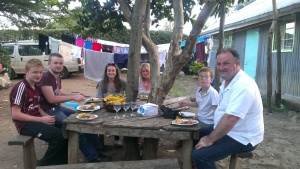 Meanwhile the rest of the family landed in Nairobi and settled into their campsite.  We discussed the options of staying an extra night in Nairobi versus continuing with the trip and having the other two catch us up.  They decided to do the latter – we weren’t travelling too far the next day and it was very easy to organise another vehicle to meet them at the airport and bring them to Lake Naivasha.

We didn’t expect Ryan and Fergus to arrive much before dinner, so the rest of the family went for a bicycle ride around to Lake Oloiden, a soda lake adjacent to fresh water Lake Naivasha.  There is an incredible array of birdlife and several hippos residing in the lake and a boat ride is the perfect way to enjoy it.  But as if that wasn’t enough, you will never guess what else they saw… a leopard!!!  Yes!  It was climbing in a tree close to the shore.  It took me five months in Africa before I spotted my first leopard and here were the McDonnell family just 24 hours on the continent being spoilt with the most awesome sighting!  Just don’t tell Ryan and Fergus, who were still battling their way through immigration. 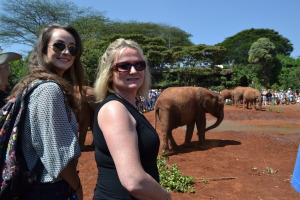 The family reunited in time for Christmas dinner (roast pork, vegetable skewers, rice, brussel sprouts, carrot mash and Christmas cake) during which we were regaled with the tale of getting a new passport during the Christmas holidays.  It all worked out and here everyone was.

Boxing Day was much more relaxed and the family could settle into holiday mode properly now.  We spent the day at Lake Naivasha and started with a walking safari in Wileli Conservancy.  There aren’t many predators in the Naivasha area (never mind the leopard from the previous day!) so it is one of the few places in Kenya where you can enjoy walking and cycling safaris.  I think jet lag and the general stress of the passport problem caught up with everyone in the afternoon because they all disappeared.  Everyone except Ryan that is, who had hired a bike and was zooming around the campsite at top speeds startling the Marabou Storks.  Rain threatened and Francis diligently ensured all the tents were closed up, thinking the family were in the bar.  Half an hour later a red-faced Chris emerged from one of the tents looking like he’d just come from the sauna.  That’s when we realised we had shut everyone inside their tents as they slept. At least they were dry!

The following day Francis took the McDonnells to the Maasai Mara Game Reserve.  Kenya’s premier tourist destination, the Maasai Mara is home to the famous Wildebeest Migration and has the highest population density of lions anywhere in the world.  It wasn’t the right time of year for the migration, but animals they spotted included lion, elephants, impala, topi, and a giraffe who wandered in at lunch as the family picnicked under an acacia tree. 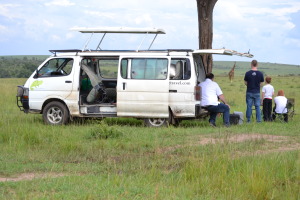 At the Mara River there is a good opportunity to stretch legs as spending a full day game driving can get tiring.  There are rangers at the river who will escort you for a short walk to see crocs and hippos in the river…Just don’t get too close!

Back to Nairobi to explore properly and rest a bit before beginning the big drive to the coast.  The David Sheldrick Elephant Orphanage is one of Nairobi’s “must sees” and that is where we could be found at feeding time the next day.  The baby elephants are too cute, but their stories are sad.  The David Sheldrick Wildlife Trust does excellent work looking after the young orphans and eventually rehabilitating them back into the wild.  They are bottle-fed a special milk formula at 11am everyday when visitors are allowed to come, meet them and pat them if you are lucky. 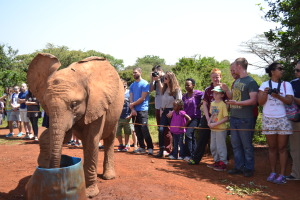 After the elephant orphanage we stopped at the mall for lunch (the boys wanted a KFC fix) before heading to the Kibera slum.  Amani Kibera is a community-based organisation that works with young people through sport, education and economic empowerment to give them opportunities for a better future.  The McDonnells had bought several nonfiction books at the mall to donate to Amani Kibera’s library including an atlas.  Students of all ages study at the library after school and at weekends and the books are a key resource to assist them with their studies.

To cap off the day, the McDonnells opted to have dinner with a Kenyan family.  We went to the home of Barack and Elizabeth where we were greeted with far too much food!  Barack’s son Collins was around the same age as Ryan and we barely saw the two boys for the rest of the evening.  They continue to be pen pals.  Elizabeth had cooked up a storm of traditional Kenyan dishes including mukimo, matoke, rice, tilapia, cabbage, sikuma wiki, githeri, chapatti, beef stew, sweet potato and ugali.

The next day was a long drive to the village of Itinyi where we stayed at Mama Mercy’s Ndoto Bandas.  Mama Mercy works in her community assisting girls to get an education and be safe in the process.  She is helping to establish a boarding house at the girls’ secondary school.  Girls often get into trouble with men, sometimes by choice and sometimes not by choice, as they travel between school and home.  Eliminating this travel by having the girls accommodated at the school is vital to the success of the girl into her future.  Mama Mercy also personally sponsors five girls, paying their fees and hosting them in her home.  She is truly a woman who practices what she preaches.  The money she raises by hosting guests in her bandas (a Kenyan word for a small hut) helps her in her sponsorship. She also assists women in the village by selling their handicrafts in a small shop co-located with the bandas. 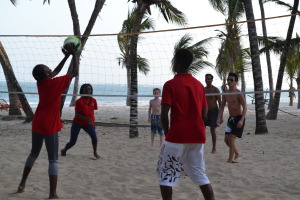 New Year’s Eve at Mama Mercy’s was a bit of a quiet affair; after the long drive everyone was a bit tired to stay up to see 2015 click in.  Most of us made it though.

Finally we got to the coast.  In order to avoid the horrendous traffic through the middle of Mombasa we took a detour through the Shimba Hills – it was a longer drive distance-wise, but beautifully scenic.  We pitched our tents at a campsite right on the beach; a perfect conclusion to this safari.  Everyone disappeared to the water almost immediately.

After a morning of snorkelling, Chris and David were ready for something more adventurous.  So we headed to Amani Tiwi Beach Resort for lunch and whatever activities could be found there.  Chris and David found diving, Ashley and Ryan found beach volleyball, Fergus found wi-fi and Grace found a glass of wine.  Something for everybody!

And then it was the end of the trip.  The tents were pulled down for the last time and we headed to the airport.  It was such a fun ten days for all of us – it’s why I love my job, it doesn’t really feel like work when we get to travel with such a fun family! 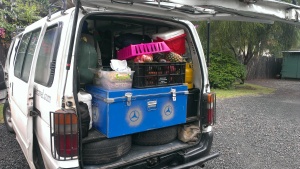 If you enjoyed this article and want to learn more, read our Spotlight On: Family Fun in East Africa and follow the links below!

Spotlight On: Norwegian’s “Epic” and Family Cruising in the Caribbean

Spotlight On: Our Newest Book, “Guide to Planning the Perfect Family Vacation”

Spotlight On: Ocho Rios, Jamaica While on a Family Cruise

Spotlight On: Review of the MSC Divina Cruise For Families

Spotlight On: “Finding Neverland” and Family Fun on Broadway in NYC

Spotlight On: Our New Book, New York City for Families