We are an adventurous family, but we do like our comfort at times. We are willing to step outside of our comfort zone sometimes though, and we will rough it at times in order to see remote places and visit out of the way attractions. We try to pack each trip that we take, and we want to see and do as much as possible while we are traveling. We enjoy hiking and other outdoor activities, and we try to include educational stops whenever possible. We do schedule some time to relax, so that we can take in the local scenery and culture. Our children at the time of this itinerary: 3 children-Boy age 19 years, Boy age 14 years, Boy age 12 years.

Stop 1: Church of All Nations 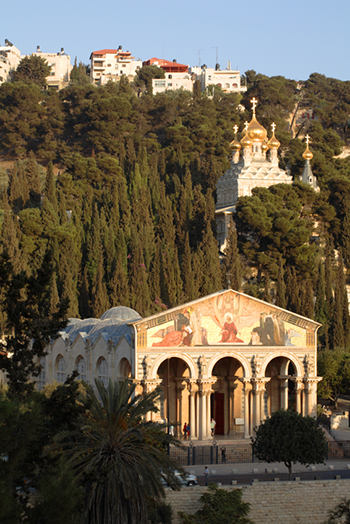 Description: The Church of All Nations may also be called the Church of Agony or the Basilica of Agony. This is a church of Roman Catholic origin that is situated in Jerusalem, Israel, on the Mount of Olives and situated by the Garden of Gethsemane. This church is used by more than one faith, and it contains a special piece of bedrock that Jesus prayed at before he was arrested and crucified. Before the current church was constructed the location was the site of two previous churches, one of which was destroyed in the 1300s and one that was abandoned by the Crusaders in the 12th century. Work on the current church started in 1919 and was completed in 1924, when the church was consecrated.

Our Experiences: The Church of All Nations was a fascinating place. The architecture alone that we saw made this stop well worth a visit. Just like the name implies we found many religions saying a prayer or worshiping here. The gardens were beautiful, and the art work and decorations in the church were fantastic. This was not a favorite stop for all of the kids, but this was an educational stop that we recommend to others just for the history and architecture found here.

Description: The Tomb of Avshalom, also known as Avshalom’s Shrine, is a monument that dates from the first century of the BCE era. This is supposed to be the tomb of King David’s rebellious son Avshalom. The tomb is carved out of the rock, and it is located along with other burial caves that were carved out in a line. The tomb of Avshalom is supposed to be one of the most beautiful out of all the rock tombs located in Israel. Legend holds that Avshalom built the tomb himself because he fathered no sons to take on this duty.

Our Experiences: The tomb of Avshalom was an interesting stop, and the pillar which surrounds the tomb was quite tall. The actual tomb area was somewhat small but the architecture and decorative accents were really nice to see. The history of this tomb and the fact that it dates back to the first century was enough to engage even the youngest child’s interest. This stop is worth a little time, not one where you would spend hours but 30 minutes or so should be plenty of time to explore the tomb and see everything.

Description: The tomb of Zecharia is supposed to be the place where the righteous priest Zecharia was buried after he was stoned to death, and this tomb and burial cave dates back to the early BCE era. Zecharia was stoned to death because of his actions, he took it upon himself to chastise and preach to the people who were in the First Temple Courts. This monument is very grand, and it is a popular place for people of several religions to visit when they come to Israel. Zecharia was the son of Jehodia, who was also a priest.

Our Experiences: When we visited the tomb of Zecharia we were impressed. The entire tomb and structure was carved out of the surrounding rock, and the tomb structure was topped with a large pyramid. The inner chamber was accessed by a hole, and there were stairs that went up the tomb exterior as well. This was an interesting stop, and one that was very educational for our family.

Description: An evening view of the Western Wall can be a memorable experience. The Western Wall, also known as the Wailing Wall, holds great religious significance for many religions, and thousands visit this structure each day to offer prayers and ask for forgiveness. This wall is the western wall which supported the Temple Mount, and according to the Jewish religion it is the most sacred spot on Earth. According to Jewish religion the Divine Presence never left the Temple Mount, and the Western Wall is the closest structure to this Divine Presence. This structure is also a place of mourning, and that is why it is often called the wailing Wall.

Impressive Views For The Whole Family Throughout Jerusalem

Description: The Mount of Olives Observation Deck is a fantastic way to look out over the surrounding areas and get a bird’s eye view of this historic land. The Mount of Olives is surrounded by hilly areas, and much of the land is taken up by cemeteries and burial tombs. With Jerusalem on one side and the Judean Desert on the other this is the perfect place to view the scenery. The Mount of Olives is very important in the Jewish religion even today, and in the past it was the center of the Jewish life and culture as well as a place with incredible religious significance.

Our Experiences: The Mount of Olives Observation Deck provided some terrific views, and the kids were excited to see everything from high up. The rich history of this area made seeing the various areas from the observation point even more interesting. We were impressed with the great views from this point, but this stop may not be right for anyone who is scared of heights or gets dizzy while looking down.